In sports such as golf that need to create maximal speed of a distal segment or implement (club, bat, racket etc.), it is generally found through motion analysis techniques, that there is a precisely timed sequence of body segment motions progressing from the proximal, large segments to the distal, smaller segments. In the biomechanics literature this is often called "proximal-to-distal-sequencing", "kinetic linking" or the "kinematic sequence".

During the downswing in golf all body segments must accelerate and decelerate in the correct sequence with precise and specific timing so that the club arrives at impact accurately and with maximal speed. The correct sequence of motion for the major segments is: pelvis, trunk, arms and finally club. This motion must occur sequentially with each peak speed being faster but later than the previous one. This sequence reflects an efficient transfer of energy across each joint and facilitates an increase in energy from the proximal segment to the distal one. The muscles of each joint produce this increase in energy. On the other hand, if the timing of energy transfer is wrong, energy can be dissipated instead of added and as a result, speed will be lost. Also if one body part has to compensate because another is not doing its job, then injury may result.

During the forward swing, the larger, core segments such as the pelvis and trunk, move slower with the speed building as the energy progresses to the smaller distal segments such as the arms and club. Note that the pelvis does not continue accelerating through impact, but decelerates before impact. Whether the deceleration of the previous segment is caused by the acceleration of the next segment or, whether the previous segment is actively decelerated by muscular action is still a matter of debate within the biomechanics community. Further research is needed on this point.

In order to quantify the differences in the kinematic sequence between golfers we compare specific values from the segmental rotational speed curves. For example, we can look at the:

1) Maximum rotation speeds of each segment.

4) Timing of maximum speeds with respect to impact.

Using these parameters we can quickly tell what segment of the body is in error.

So in summary, and looking at the graph above, between "T (top of the swing)" and "I (impact)" the kinematic sequence proceeds as follows:

The kinematic sequence is probably the number one most important piece of information that we use in assessing a new golfer. 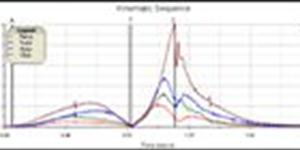