A Strength Coach Psyched About Coaching 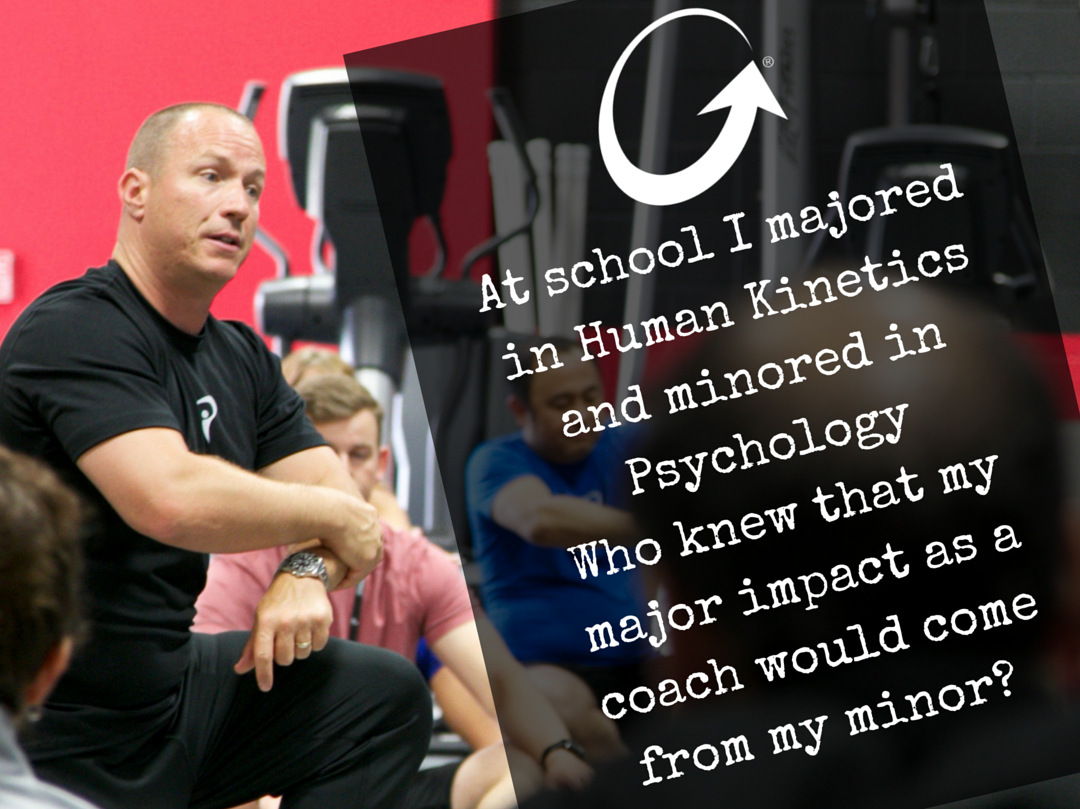 In school I majored in Human Kinetics and minored in Psychology. The knowledge I gained in Human Kinetics has helped me develop my training philosophy and is the backbone of my success as a strength coach.  The psychological side of my education is where I really have made the biggest impact with my athletes.

The meeting of the minds between the coach and the athlete is where real change occurs.  You can have the best programming in the world, replace stick figure drawings with flashy video libraries and prescribe the perfect mix of intensity, duration and load.  If the athlete doesn’t buy into the training philosophy or believe in the process they won’t comply to your plan.  You need to put down your clipboard and engage with the human being that is standing in front of you.  I spend a great deal of my initial assessment and subsequent meetings listening to what the athlete is wanting.  As coaches we are so eager to fix, share our nuggets of knowledge and put together the game plan that we neglect to understand what is driving the athlete.

Why don’t you give us an example Jay?  Great idea!  Years ago I had a young golfer who had some physical limitations that was directly affecting their swing mechanics and a potential causing injury down the road.  After discussing it with her swing coach we agreed that she needed some serious work in the gym to help her develop core stability and side bend control (if you would like more information on my Side Bend Assessment and how it correlates with the golf swing please email me info@jasonglassperformacnelab.com).  I developed the coolest program with great transitions to make the workout flow beautifully.  I pushed her in areas where she was strong and addressed the limitations in a way that she would feel like an athlete and not embarrass her with remedial exercises.  It was the perfect program!  All of this meant nothing due to the fact that she didn’t feel that training in the gym was where her energy should be spent.  She was young and didn’t care about injury.  She already hit the ball miles so having her coach tell her that training would help her hit the ball farther was falling on deaf ears.

So what is a coach to do?  STOP! LISTEN! COMMUNICATE!  I asked her about what her physical goals were.  She opened up and said that she had her high school formal coming up in a few months and wanted to show all her classmates that she wasn’t just a golfer but a woman.  Simply put…she wanted to be a knockout in her prom dress!  As a coach I couldn’t care less about her appearance, but to her it was everything!  I had found her driver.  Not the long club with the colourful head cover, but the driver of what motivated her to get in the gym.  A few little tweaks to her program and a food log later and we have an athlete driven and determined to put some sweat on the gym floor.

Now here's the kicker.  I gave her the program and told her she needs to perform the exercise a minimum of 3 days a week.  “What if I did it more,” she asked.  I told her, "You will get the results faster!  If you are going to do it more than 3 days a week leave out the following strength elements that require time to recover.  Other than that you can go to town!”  Three weeks later I received an email from her coach telling me that her mechanics started showing improvements without any technical intervention.  She was staying in her posture throughout her swing and improving her ball flight.

Coaching isn’t just about X’s and O’s or reps and sets, it's about connecting with your athlete and figuring out what drives them.  I'm glad I had the opportunity to learn psychology in University.  Who knew that my major impact as a coach would come from my minor?

Jason Glass Host of the Coach Glass Podcast on iTunes

Host of the Coach Glass Podcast on iTunes