Jon Rahm Breaks Down His Swing with Me and My Golf 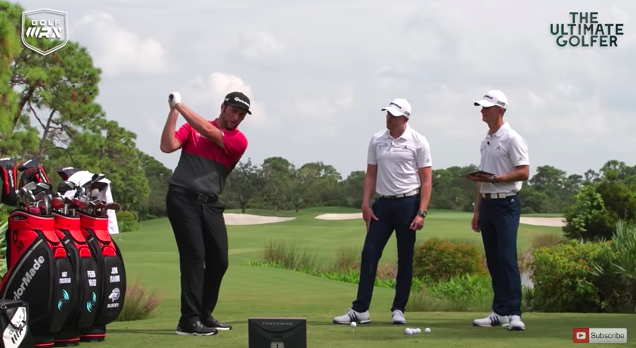 If someone ever says that there is one “right” way to swing, point to Jon's swing as evidence that they are wrong.  He doesn't have the width of Dustin Johnson, lift his lead heel like Francesco Molinari or leave the ground like Justin Thomas, but - at just 24 years old - he shares a place in the top 10 of the OWGR with them.

Jon recently joined Andy and Piers from Me and My Golf to break down his swing.  The analysis that they shared was not only extremely insightful, but especially relatable for the average recreational golfer.

Andy, Piers and Jon are all brilliant golf minds who appreciate the importance of acknowledging a golfer's physical capabilities.  The purpose of the TPI screen isn't to get golfers in the gym (though it's often by-product), but to understand how a golfer's body is affecting their swing.  Many golfers would like to swing like Adam Scott, but, invariably, their bodies will prevent them from doing so.  Don't try to teach a student to copy a TOUR player's swing if they can't move like the TOUR player.

“I started working with a swing coach that created my swing about 10 years ago and there were people on the national team that tried to have me have a perfect plane and parallel club.  That was before TPI really kicked in. I’m not physically able to do that. My body can’t do that. I don’t have the back flexibility to be that far back there and be comfortable.  I was doing a lot of movement that wasn’t comfortable for me."

We don’t believe in one way to swing, rather in an infinite number of swing styles. But we do believe the most efficient swing for every player is based on what their body can do.  Jon echoes that:

The reason why Jon feels like he's making a full swing is because he IS.  Based on his 3D data, his swing my be "short," but based on his movement screen, it's full.  Here's a Body-Swing Connection feature that Dr. Rose and Dave Phillips did with Jon last year.

Jon has always been a big, strong kid.  Power will never be his issue, but when we first saw him, mobility was. He's done incredible work with his team of Spencer Tatum, Dr. Jimmy Yuan and Dr. Harry Sese.  They filmed his TPI screen at the end of last season and his performance was significantly different than when we met him as a teenager.

@wintheday10 and @warriorrestore taking @jonrahm through a TPI screen at @advantage.training fresh off his third win of 2018. If you’re only screening on client intake, you’re missing an opportunity to gather important feedback on how an athlete’s movement capabilities change throughout the season(s).

The following exchange at 8:35 of the Me and My video is terrific.  Andy and Piers are TPI Certified and Jon has been coming to see us for almost a decade.  They understand the Body-Swing Connection, as evidenced by this discussion.

Piers:  It’s YOUR full swing isn’t it?  And that’s the key, it’s actually your full swing.

Andy: What I like about that is for the guys at home, if they’re watching people like DJ and trying to copy DJ, their body can’t do what DJ’s can do.

Rahm: He’s a freak of nature.

Andy: You’ve got to be able to work within your limits.  You know what you’re capable of doing and you work to get the most out of it.

Rahm: I think that’s the best thing.  Just knowing your limits and maximizing your capabilities within your limits.

Andy and Piers run one of the most popular online coaching businesses in the world.  Jon is a potential future World #1.  If either of them get tired of their jobs, we could find a place for them to teach our content.