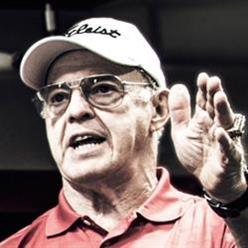 His knowledge and implementation of new techniques and training methods have made Vermeil's programs highly visible and respected throughout the sports world. He has developed successful training programs in a wide variety of sports including football, basketball, baseball and golf.

Mr. Vermeil established himself as a very successful high school football coach before joining the San Francisco 49'ers in l979 as the strength and conditioning coach. His programs made major contributions to the team's winning of the l982 Super Bowl Championship.

Vermeil is often the featured speaker at many coaching clinics including the National Strength and Conditioning Association, National Athletic Trainer's Association, Italian National Basketball Clinic in Rome, Italy, Greek National Basketball Clinic in Athens, Greece and The Mayo Clinic. During his thirty-eight year career, Al has often been the subject of television, radio and newspaper interviews. He has written numerous articles for major publications including Golf Digest, The National Strength Coach Journal, Muscle and Fitness and Conditioning Association Journal, as well as several conditioning manuals.

Al and his wife Diane reside in Lincolnshire, Illinois. Their daughter Elizabeth is married and working in business in Cincinnati Ohio, for Fifth Third Bank.