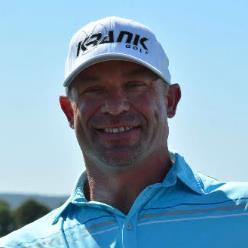 Jason Zuback has earned international fame in the field of golf as one the world’s longest driver of a golf ball in the history of the game. He is the six-time World Long Drive Champion. He is the only competitor to have won more than 3 open division championships (5 Open titles + 1 Senior). Jason is the first from outside the United States to have won the prestigious title. In fact, he is the first international competitor to have ever made it to the finals in the event’s history.

Jason has been involved in golf related fitness his entire career, and has been part of TPI since its inception in 2003. TPI is the world’s leading educational organization dedicated to the study of how the human body functions in relation to the golf swing. Jason joined the highly acclaimed field of TPI advisory staff members a number of years ago, and is an instructor in the TPI Power Coach Certification program. Jason holds a very unique position on the TPI advisory staff. He competes and has competed at the highest level in the sport of long drive through his tenure, as well as performing a full schedule of outings, exhibitions, appearances and corporate/charity events each year. Jason brings a unique blend of real world expertise and experience in strength, power and speed training, and their application to golf. He has worked with many notable experts and leaders in sports performance and golf technology. Jason has a strong scientific background being a pharmacist graduating from the University of Alberta with distinction, bringing an uncompromised work ethic and discerning analytical approach to golf fitness and performance. Jason has put theory into practice having success at the highest level in his sport, proven by 6 World Titles over 20 years of competition. Jason has worked with many players from amateur to tour professional on golf related fitness and distance improvement.

Jason stormed the worldwide Senior Long Drive scene in 2015, just like he had some 20 years earlier in the Open Division. Jason earned two World Championships in the +45 year age bracket with wins at the: World Powergolf Matchplay Championship in Sweden, and the World Long Drive Championship in Oklahoma, USA.

Jason claimed his 6th World Long Drive Championship in his 20th year of his career. In his first appearance as a Senior competitor, Jason dominated the field by winning every round of the competition, and winning the final head to head match by 20 yards. Jason is the first competitor in history to win both the Open and the Senior Championship in first appearances in respective divisions.

At the World Powergolf Matchplay Championship in Linkoping, Sweden just a few months prior to the World Championship, Jason navigated through the exceptionally strong field of Senior competitors in the head to head match play format to capture the victory. Also competing in the Open division, Jason held his own against the world class field advancing to the match play final, but coming up just short with a second place finish.

Jason has set the benchmark of performance consistency at the World Long Drive Championship and amassed a number of accomplishments with respect to the sport of Long Drive:

Appearing in the May 2008 Muscle & Fitness article “Driving Force” by Joe Wuebben, Jason’s career and training were profiled. Jason is the only Golfer ever to be featured in the pages of Muscle & Fitness Magazine, which is typically reserved for the world’s best bodybuilders and athletes.

Jason has dedicated his life to hitting the golf ball as far as humanly possible, but he is classified as one of the World’s top golf entertainers as well. Jason’s exhibitions, knowledge, skills, and long drive prowess are sought after world-wide. Jason has performed over 500 exhibitions in over 20 countries and across 4 continents. Jason’s unique blend of: world class distance, instruction, fitness knowledge, trick/performance shots, entertainment and humor make his exhibition an outstanding addition to any golf event.